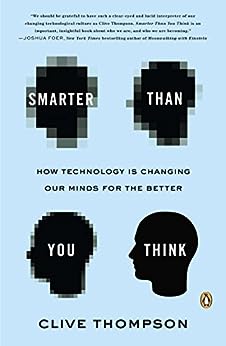 I finished reading Clive Thompson’s “Smarter Than You Think” about 2 weeks ago. The topics have had time to stew. Now it’s time to put these thoughts down in a blog post. Here we go!

There is no question that technology is changing the world. Marc Andreessen famously said, “Software is eating the world.”

Thompson takes it a step further. Not only is software eating the world, it’s eating us, masticating us, and pooping us out changed for better or for worse. It all depends on how you see the world.

“Smarter Than You Think” contains stories that show that the contest between humans and computers has been settled. When IBM’s Deep Blue beat Kasparov, it signaled the end of human intelligence and the ascendance of the T-1000.

Read a bit further and Thompson makes his real point. In a battle of intellect between humans and computers, the computer will always win. However, team up the computer and the human and they beat computers!

Here is a procedure for pairing humans and computers to win the game of life in 2019:

“The one thing that both apocalyptics and utopians understand and agree upon is that every new technology pushes us toward new forms of behavior while nudging us away from older, familiar ones.” – Thompson

What happens when we get nudged too far from what we’re used to?

“Any economist will tell you that when you suddenly increase the availability of a resources people do more things with it, which also means they do increasingly unpredictable things.” – Thompson

What will we do with the power that we have harnessed from computers? What happens when our iPhones do more than just storing our images? What do we do with all these digital memories?

“The real power of digital memories will be to trigger our human ones.” – Thompson

Then what happens when we’re overwhelmed with too many digital memories?

“Viktor Mayer-Schonberger, the author of ‘Delete: The Virtue of Forgetting in the Digital Age’, says we’ll need to engineer more artificial forgetting into our lives. He argues our life traces would consist only of the stuff we’ve actively decided ought to stick around a day, a week, forever.” – Thompson

Contemplation is required to order this new chaos.

“One of the unspoken cardinal rules of online expression is be more interesting – the sort of social pressure toward wit and engagement that propelled coffeehouse conversations in Europe in the nineteenth century.” – Thompson

“People walk around with tons of information and wisdom in their heads but with few outlets to show it off. When you see someone asking a question on a subject you know about, it catalyzes your desire to speak up.” – Thompson

“Academic research into question-answering sites has found that answering begets answering: people who respond to questions are likely to stick around for months and and answer even more.” – Thompson

But never be negative in your responses.

Why do you need to participate in your own evolution in this digital life? Why don’t we level up each other to make it easier?

“The fun in a game isn’t in having mastered it. It’s in the process of mastery – of figuring out the invisible dynamics behind how the thing works, revealing its secrets.” – Thompson

Thought the internet would save you from having to network in the real world? Think again!

“Reaping the cognitive benefits of the Internet often requires social work. This distresses anyone for whom social work is a chore or seems beneath them.” – Thompson

Above all be authentic:

“It’s about authenticity and bringing new information into the network. Those are the people whose message actually spreads. Quality, delightfully, seems to matter.” – Thompson

Above all be visible:

“To make social change begin to snowball, we need to make our thoughts visible. When members of society think in public and keep in ambient contact with one another, it creates a new environment – where we’re increasingly aware of what changes might be possible.” – Thompson

“Evidence suggests that the more socially active people are online, the more civically active they are offline, too.” – Thompson

I hope this blog helped you more clearly envision the changing world we are living in. By writing, sharing, and pairing with your computer I hope you more clearly see how to evolve by spreading your thoughts and participating with others to reap the benefits of the network.  I hope that these posts allow you to see your evolving position in the world. I hope the coming changes provide you with great riches and good health.