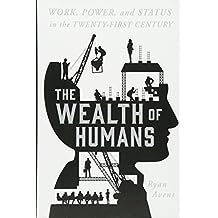 Today I’ll be posting on the book “The Wealth of Humans” by Ryan Avent. I’d like to discuss how work serves a purpose. When there are too many workers companies create bullshit jobs. When their jobs are bullshit people lose their sense of identity. When people lose their identities they stop contributing to the creative juices that produce the company’s culture. Once the free sharing of information stops the company is toast.

Work is not just work.

“Work is not just the means by which we obtain the resources needed to put food on the table. It is also a source of personal identity. It helps give structure to our days and our lives. It offers the possibility of personal fulfillment that comes from being of use to others, and it is the critical part of the glue that holds society together and smooths its operation. Over the last generation, work has become ever less effective at performing these roles. That, in turn, has placed pressure on government services and budgets, contributing to a more poisonous and less generous politics. Meanwhile the march of technological progress continues, adding to the strain.” – Ryan Avent

Bullshit jobs don’t provide the same sense of personal identity, structure to our days and lives, and the possibility of personal fulfillment to others that real work provides. What happens when work works?

“When work works, we understood, it provides a basis for a stable social order. It gives people something to do. It gives workers the sense that they are contributing to society and to the welfare of their families. It allocates income in a way that – if not always seen by everyone as just – is accepted by most as a valid basis for the distribution of resources. It encourages people to seek out the things at which they are comparatively good and to develop those skills. It makes the world go.” – Ryan Avent

So what starts the decline from true work to bullshit jobs?

“When things are abundant, they are used carelessly. When water is plentiful, people leave taps running and irrigate massive, thirsty lawns hours after a rainstorm. When labour is plentiful, three workers pour the tea. If labour abundance is dramatic enough and prolonged enough, then the entire structure of an economy can warp, at first putting people to work doing low value kinds of tasks.” – Ryan Avent

Who does this harm? Who does this benefit? Perhaps the idea of a bullshit job is that it does not have any function or meaning. It’s just a means to occupy and employee’s time.

“The way that information flows within firms is hugely important to a company’s performance. The ways that workers talk to each other, or decide what kinds of information to pass along to their bosses, make the difference between success and failure.” – Ryan Avent

It’s up to the culture of the workplace to keep the information passed along. Knowing everything that’s happening from the top level down allows the culture to build up and to support the needs of the people working there.

“Part of what makes the firm’s information processing machinery work is the knowledge contained within every worker’s head: the culture of the firm.” – Ryan Avent

More about the flow of information.

“Knowing what information matters and what to do with it is the difference between a wildly profitable company and a bankrupt one.” – Ryan Avent

Have you seen this happen first-hand? Contact me, I’d love to hear how you dealt with it. 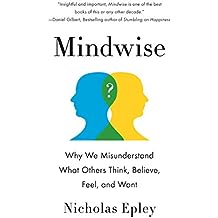 I’d like to start off with the assumption from the end of this book that there is no reliable way to read people and infer their opinion. In fact, Nicholas Epley states exactly that in his book “Mindwise: Why we Misunderstand What Others Think, Believe, Feel and Want.”

In this blog post I’ll explain just how to go about getting the other person’s perspective. Then I’d like to talk about how ineffective our ways of asking questions are.

A School of Life video talks about how we could remove so much of our anxiety about getting things wrong if we were only to ask instead of infer about the other person’s state of mind.

According to Alain de Botton from the School of Life, we would only be able to talk once we had summarized the other person’s point until we got it right by them.

First let’s talk about getting a perspective. Why is it important? You need perspective to discover new things. If we see correctly we will spend less time ruminating about what we thought we saw, how we should have been treated, and what we could do next time so we don’t allow ourselves to get into a yet another situation like this. Any thinking and preparing for the next time we encounter this person will be better because we have thought this through again and again and again.

But sometimes rumination feels productive. Like we’re never going to get ourselves in this situation again. But I believe that rumination is not worth the time and energy to bolster your defenses against this kind of brash talk from a friend, reprimand from a superior, or faux pas at a dinner party.

Instead of learning to dodge the bullets, learn why the bullets are being fired in the first place.

You need to get out of your head and gain some perspective by diving into the others’ head. Epley describes the goal of writing this book as, “to improve your psychological vision.”

“In each of us there is another whom we do not know.” – Jung

“The only true voyage of discovery, the only fountain of Eternal Youth, would be not to visit strange lands but to possess other eyes, to behold the universe through the eyes of another.” – Proust

“Understanding other people requires getting their perspective and then verifying that you’ve understood it correctly.” – Nicholas Epley

This is exactly what de Botton is suggesting – that necessary extra step to verify that we’ve understood correctly. Can you think of anything that would get in the way of our asking?

“Our most common mistakes come from excessive egocentrism, over-reliance on stereotypes, and an all too easy assumption that others minds match their actions.” – Nicholas Epley

And when we fail to take the time to see things from the point of view of others we get into trouble. If we abstain for too long, we may start developing bad stereotypes about the person we are trying to understand.

“Failing to engage your ability to reason about the mind of another person not only leads to indifference about others, it can also lead to the sense that others are relatively mindless.” – Nicholas Epley

Now that we know where the potential landmines are, let’s learn the minds of others in a context that helps us survive longer and with less headache. We need to work smart, not hard.

If you’re interested in really understanding the other person, pay attention to their voice.

“You get your PhD in mind reading , according to Darwin, by learning to compare what a person shows quickly with what they say slowly.” – Nicholas Epley

In “The Secrets of Consulting,” Gerald Wineberg advises consultants to do something similar. He cautions us to “make sure the music matches what is being played.”

The shortest distance between 2 points is a straight line.

“It may seem like cheating to ask your spouse what he or she thinks instead of guessing at the answer, but remember that life is not an in-class exam with an honor code. If you want to know, ask rather than guess. Spouses understand each other when they are willing to share their thoughts openly and verify that they’ve heard correctly.” – Nicholas Epley

I’ll say it again because it bears repeating, “If you want to know, ask rather than guess.”

“The relatively slow work of getting a person’s perspective is the way you understand them accurately, and the way you solve their problems most effectively.” – Nicholas Epley

Epley suggests taking a breather before you reprimand someone. By empathizing with a colleague, you’d be able to know that it’s better to let them have some time to see the problem clearly before you punish them for it.

“The main reason people lie is to avoid being punished, and so enabling people to give you their perspective requires putting them in a context that diminishes the fear of punishment. A very clever experiment by one group of researchers showed that people were more wiling to admit to having done something immoral when confronted a few minutes after the event – when their fear has subsided a bit – than when questioned immediately after the incident.” – Nicholas Epley

Finally, a sense of humility is required. This brings new meaning to the phrase, “Keep your head down and do the work.”

“Knowing the limits of our brain’s social sense does not always mean that we can overcome them to understand others better. Sometimes a sense of humility is the best our wise minds can offer, recognizing that there’s more to the mind of another person than we may ever imagine.” – Nicholas Epley

So now that you’ve read the pro-tips let’s summarize what I said earlier in this blog post:

Did this write up help you in learning to read the minds of others more clearly? Contact me and let me know.