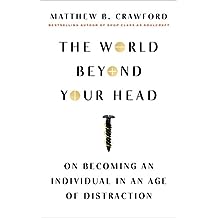 This is the first post of 3 I’ll be doing on Matthew Crawford’s “The World Beyond your Head – On Becoming an Individual in an Age of Distraction.” In this post I’d like to focus on three different thinkers and how isolation kills creativity.

We’ve all felt it. The pang that this work would go faster if people would leave me alone so I can get my work done. This works well when you know exactly what you are doing because you’ve done it a million times before.

Perhaps that’s why when other famous artists of his time like Henri Matisse and Paul Gauguin were traveling the world to find inspiration and new ways of looking, Picasso was content to sit alone in his studio night after night in isolation, waiting for the muse to strike. He rarely painted from models but rather accessed the references for his artwork from his mind’s eye.

“To attend to anything in a sustained way requires actively excluding all the other things that grab at our attention. It requires, if not ruthlessness toward oneself, a capacity for self regulation.” – Matthew Crawford

But before we head for the hills to live the life of an unwashed recluse, it’s important to talk about Frank Lloyd Wright, the 20th century’s most famous architect.Frank Lloyd Wright’s contributions to the world of architecture include over 1,000 designs and nearly 600 completed buildings.

At the height of his career he gave up on living in the city and retreated to his home Taliesen in Wisconsin.

What followed the move to Taliesen was 8 years of unproductive work. What caused this unproductive period? He had isolated himself so thoroughly that he no longer swam in the intellectual ideas he had before. His inspiration waned and the 20th century’s best architect ossified.

“We think through the body. The fundamental contribution of this school of psychological research is that it puts the mind back in the world, where it belongs, after several centuries of being locked within our heads. The boundary of our cognitive processes cannot be cleanly drawn at the outer surface of our skulls, or indeed of our bodies more generally. They are, in a sense, distributed in the world that we act in.” – Matthew Crawford

I believe that Crawford is trying to say that we need to be in the swing of things to really appreciate what’s around us.

A 14th century Zen master Dogen Zenji put it simply, “If you walk in the mist, you get wet.”

I’ve had a number of projects that I’ve worked on. Most of them have been me working on something, believing in it and working by myself to get things done. It’s worked well but at the same time I can’t help but feel that you need to have other people there to bolster your strengths and hide your weaknesses.

We are so much stronger when we have help from other people. There are ways that I could not do things on my own or that I am blind to the reality of the problem because I only see it from my perspective.

What happens when you have another set of eyes?

“A passenger acts as another pair of eyes on the situation he inhabits with the driver, and tends to improve a driver’s ability to notice and quickly respond to out of the ordinary challenges.” – Matthew Crawford

Another pair of eyes can illuminate areas of reality you’re blind to:

“In other words, one has to be able to explore a scene from different perspectives to perceive what remains the same about it – its nature and structure, regardless of perspective – and locomotion is an indispensable part of this process.” – Matthew Crawford

But don’t just trust any other set of eyes. It’s very important to make sure that the others you are relying on share your beliefs, passions, and attention to detail.

“The cohesiveness and ongoing association of a firefighting unit offer an advantage not enjoyed by most motorcyclists: they are under mutual surveillance and can criticize one another’s mistakes. They can also cover one another’s blind spots, offering up a third-person perspective such as: There was a large ember floating upward right behind you as you exited that room. You got lucky. Such facts, conveyed by a colleagues, can become material for a fire fighter’s retrospective understanding of the situation, or indeed a collaborative reconstruction of it. His own experience is altered in conversation.” – Matthew Crawford

I pair program with 2 other developers in San Francisco twice a week. I’ve learned more through these pair programming sessions than I ever could studying from a book or taking a course. We are constantly interacting with each other, questioning decisions, validating assumptions, seeing how each other solves tasks, and sharing our pro-tips.

“Getting things right requires triangulating with other people.” – Matthew Crawford

In his last lecture Randy Pausch sums it up perfectly:

“The key to innovation is that teams beat individuals.” – Randy Pausch

Has this post clarified the need for collaborators? Co-conspirators? Let me know. I’d love to hear about the teams you build to keep you in touch with reality and not flailing, stuck in your head.